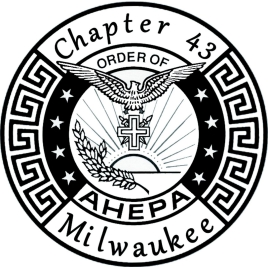 Kalos Orisate – Welcome! It is with great pleasure to welcome you to the website of Milwaukee Chapter No. 43 of the Order of AHEPA. Our chapter was established on March 17, 1924, less than two years after the American Hellenic Educational Progressive Association was born in Atlanta, GA. We are very proud to share with you our rich history and aspirations for the future.

AHEPA said OXI! (NO!) to the KKK and the evils of bigotry and racism that emerged during the early 20th century. The AHEPAN response was to say NAI! (YES!) to the ideals of ancient Greece which include education, philanthropy, civic responsibility, and family and individual excellence.

We raise our glasses to one of the great heroes of modern Greece, Prime Minister Ioannis Metaxas, who stood up to Italian Dictator Benito Mussolini during World War II and said OXI (NO!), Greece will never surrender! Mussolini's troops attacked on October 28, 1942, and the Greek population took to the streets shouting 'OXI'. Metaxas in fact, said NAI! (YES!) to preserving Democracy and Hellenism throughout the world. In response to their bravery, Sir Winston Churchill said “Hence, we will not say that Greeks fight like heroes, but that heroes fight like Greeks.”

Here in Milwaukee, the crown jewel is our highly regarded AHEPA Scholarship Foundation now in it’s 62nd year!  To date, the program has awarded over $700,000 to high school seniors and other recipients while remaining fiscally responsible to ensure it can continue for another 60 years!

We thank all those who have supported our community programs throughout the years.

No mail to this address please.